Barbed Wire in a Hammer Museum? 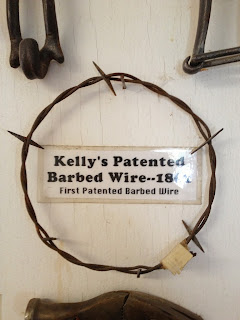 Dadio, I talked to you about putting this up while I was still in Skagway. Sorry about the late arrival, and the lack of posting. With the internet being so terrible in Skagway I can't really upload or download much. But i'll try and make up for it by posting some of my adventures over the next couple weeks :)
I traveled around south east Alaska a lot more this year. The fact of having an actual passport this time around helped a lot, also having a checklist of things that I didn't do my first year. I ended up in the larger town of Haines a number of times, larger by about 800 people so still a small town. You can get to Haines in three different ways. 1. By car, which takes about 9 hours, passport required.     2. By boat, which takes you on average 1 hour. And 3. By plane, which will take you 20 minutes. Haines has some awesome stuff that Skagway doesn't, including a bald eagle research building with a sweet taxidermy museum, a whole new set of trails, a ton of different touring companies, since its a fishing town killer fresh seafood, and last but definitely not least is the hammer museum. "Home to the worlds biggest hammer" Its a tiny 3 room building with hammers covering all the walls. They seriously had a million hammers for every occasion, including an electric hammer, dentist hammer, nut hammers, a hammer made of solid gold, railroad hammers, whiskey barrel hammers, seriously anything you could think of they have a hammer for.
But on one wall marked "Fencing Hammers" I found a small coil of Kelly's patented barbed wire from 1861. It said it was the first patented barbed wire, and this made me think of Dadio and all his work and research on the subject. Is 1861 seriously the first patent of something that useful? Hopefully Dadio you can shed some light :) 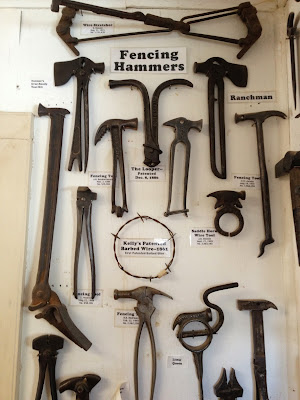 cool post Tim!
i'd love to see the hammer museum.
That Kelly patent is a good one (I have a strand of it in my office). It turned out to be too expensive to make (punching out the little diamonds with holes and stringing them on the wire) and so it wasn't till 1874 when three new patents were issued for what we basically see everywhere now.
I'll look forward to more and more of your adventures.

hey tim. used this photo today in the barbed-wire class.
thanks!

Saweet! Glad the photo could be of good use.