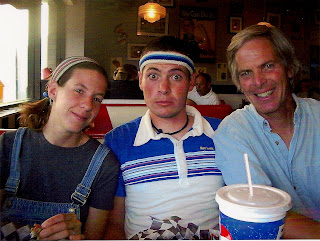 When Nate was born, I had been reading and writing about one of the great German plays of the 18th century: Nathan the Wise, by Lessing.

It's a play about religious tolerance during the Crusaders' attempts to take Jerusalem from the Moslems. Nathan has to answer the ruler Saladin's question about which is the true religion. He opts for a parable, the parable of the rings, that concludes with the wise thought that the true religion would be the one whose adherents are the best people.

Under that influence, we named our new son Nathan.

These years later, the father of four and the good husband of Ellie, the brilliant teacher and the bike mechanic extraordinaire (not to mention bathroom rehabilitator!), Nate is a very good example of that sobriquet (look it up!): Nathan the Wise and the Good.

love you Nate, and HAPPY BIRTHDAY!
Dad
Posted by Scott Abbott at 8:58 PM