See How They Run

Tim's hurdling was even more impressive than this impressive English hurdler (Tim repeatedly hurdled the couch arm -- with perfect form -- at full speed).

As he entered the stage, I gasped, sure I was seeing Ben. There was even an echo of Ben's voice.

But there was more than hurdling. There were two exciting wrestling matches. Lightning changes in and out of uniforms. Repeated dives behind the couch. And a brilliant disarming of the Russian spy (German prisoner in the original production during WWII) by tickling.

Tim was a magnificent part of a great production. We laughed and laughed and almost fell off our chairs in the middle of a great scene when Tim, without a second thought, cued the missing doorbell with a "did you hear something? Was that the doorbell?" And the scene rolled on impetuously. 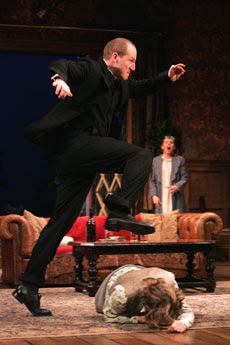